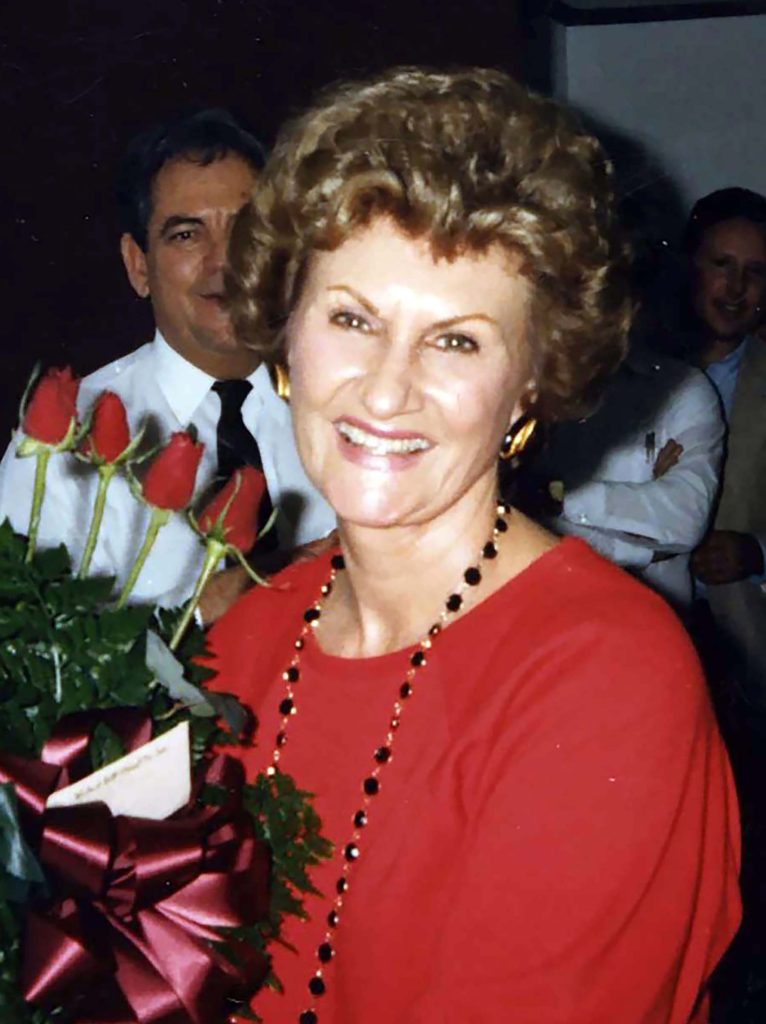 We lost our dear Rosie in 2016. She was 92 years at the time of her death. Along with her husband, Peyton Simpson, Rosie played an active role in the founding and success of Pollution Control Products Co., serving on the board until slowed by illness just a few years before her death.

The last surviving sibling of 6 children, Rosie was born August 12, 1923 in Mineola, Texas. Raised on a good sized working farm, Rosie’s life was tough during the depression. From an early age, like her siblings, she had to carry her weight. My brother and I would cringe at some of the stories she told and the difficulties she endured. She would usually laugh it off. “Everybody had it tough back then,” she would say. “And I learned a lot on the farm… I learned how to work hard.” No matter how difficult her path in life, Rosie refused to be a victim. To her, hardships were merely lessons to be learned and motivation for a better life.

Rosie left the farm at the beginning of World War ll to seek her fortune and serve her country in the big city of Dallas, Texas. Her first jobs off the farm were with government contractors supplying uniforms to the military. It was there that her hard earned “perfectionism” and extraordinary work ethic were quickly recognized. She had a real talent for attaching collars and cuffs – the hardest part of the manufacturing process. It required intense focus, an eagle-eye and high energy. She was so good and so fast that the company chauffeured her around to different locations to help keep the manufacturing lines moving. She said, “I was the pinch hitter – the catch up gal!”

After the war, Rosie’s distinguished work record and her striking good looks got her a job with Neiman Marcus. Once again her ambition and energy propelled her forward. She loved her time at Neiman’s. She quickly advanced from cashier to become a successful saleslady and a much requested fitter in foundations.

During this time she also met her future husband, a young engineering student named Peyton Simpson. They met on the Midway at the State Fair of Texas in 1946 and were married one year later on October 5, 1947. During the early years of their marriage they raised two children and actively pursued their careers. She was Peyton’s biggest champion. She supported the family while he attended SMU and she supported his career as he advanced in the corporate world. She had confidence in him and she let him know it every day. Finally, in 1971, Rose and Peyton formed Pollution Control Products Co. and everything took off.

Peyton brought Rosie into the company as an equal partner at the very beginning. She played an active role in the early years, in fact, she is credited with naming the company.

Rosie was not only Peyton’s biggest champion, she was a champion in her own right. She was an avid sportsperson – she loved fishing and often traveled with her son on exotic fishing safaris in the U.S. and abroad. Rosie was also an accomplished athlete, actively competing up until the age of 80. She won league championships in the U.S.V.B.A (volleyball) competitions and many individual trophies in racquetball.

Rosie had a vision of the way she wanted her life to be and she worked hard everyday to make it happen. Her energy and playful good humor will be missed by us all.