How Tall Was It?
Brandon and Clark Inc., an industrial sales and service company in Lubbock, TX, found the need for the burn off oven so essential that they built an additional wing to their facility for the sole purpose of housing the furnace.

Brandon and Clark Inc. tailors to a wide range of machinery, but places electric motor rebuilding at its core. They approached the Pollution Control team with a rather tall order. The company needed to clean, repair, and rebuild electric motors up to 15,000 hp and up to 12ft in size.

Our response: The VRC 3483… the tallest oven we’ve ever built. 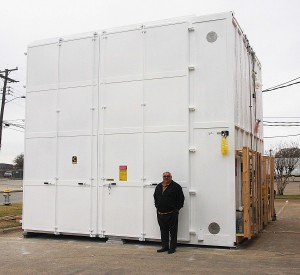 How Tall Was It?
PCPC had to hire landscapers to trim away the surrounding trees getting in the way of production.

Standing at two hundred and five inches and nearly thirty five hundred cubic feet, the massive oven extended the height of Pollution Control’s factory parameters. It was built outdoors to ensure that the oven would be the perfect size and took over a month to construct.

How Tall Was It?
PCPC had to strategically plan a logistics route to get the oven 345 miles from Dallas to Lubbock.

Maneuvering an oven of this magnitude on land was no small feat, and routing the oven safely from our plant in Dallas to their facility in Lubbock took time and careful consideration. But with over forty years of experience in transporting large furnaces regionally, nationally, and internationally, Pollution Control was equipped for the challenge.

How Tall Was it?
Taller than the average giraffe, over two times the size of the world’s tallest man, and over a hundred times taller than Roland.

How tall was it? Its the tallest oven we’ve ever built.